First of all, I want to thank all my blogger buds out there who sent well wishes for my son who tested positive for COVID last week.  You have no idea how much it meant to me that you all reached out to me to let me know you were thinking about us.  So now on to our regularly scheduled program…..

As I’ve started to get a pretty good rhythm going with my new boss, and she, in turn is trusting me and my judgement in dealing with the departmental assholes that fall under her supervision.  Okay, just one asshole who is hell bent on trying to put me in my place……and y’all know that shit ain’t going to happen, right?  Anyway this asshole, whom I’ll call Buzz McCallister because the prick reminds me of the character who was Macally McCulkin’s big brother in the movie Home Alone.   The bullying asshole motherfucking prick that thinks he can get away with anything.  So he’s an administrator for one of the clinics and it was brought to my attention that he’s got a huge ego problem because, his dad is a doctor.  And I was like “So?” but then my boss told me he likes riding on his dad’s physician coattails. 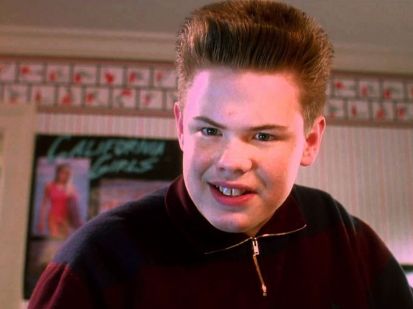 I thought to myself, Cheesus Crust what a dick if he thinks he can act the way he does because his dad’s a doctor.  That’s like me trying to be all superior because of my mom’s narcissism, okay well something like that.  Anyway, I asked if his dad was a physician here at the university and my boss said no.  And I told her “Then why does he think he can act the way he does if his dad doesn’t even work here?”  She shrugged and laughed because she agreed with me because he’s difficult to work with.  In any case my boss is basically his boss and she emailed all the administrators that I am a direct extension of her when she’s not around (I’m sure that went down well with him, like a giant horse pill the motherfucker was trying to swallow.)  So he immediately emailed me and said he wanted ME to schedule something or other and I emailed him right back and told him he had people in his own department that could help him with whatever he needed.  I reminded him I was Patricia’s associate NOT his.  I didn’t hear back from him that day, but then the next day he emailed me AND my boss saying that the administrator’s meeting was just not the same via video medium as in person. And that he believed it was better if all of them (all 15 of them) met in person.  Because my boss was out that day, I responded to him and told him that my boss will have these meetings via video until further notice.  Being the narcissistic bastard Buzz McCallister is, he promptly responded with “I’m sure the other administrators will agree that meeting in person would benefit us greatly to discuss our needs and concerns.”  His fucking idiot email is below….

So I responded to him knowing that my boss was totally okay with whatever I was going to say to him because she had already told me, “Buzz is a little shit, so be careful with him.  He’ll try to get his way.”  And I was oh hells to the no he won’t, because unbeknownst to him, I dealt with him in my other job.  And I already knew he’s a dick…..my response to his email is below….

After reading my response he called my boss to complain, and she said she told him that when she said I was an extension of her and her position, she meant it.  This was just another vote of confidence I’ve received since I began my new job.  Something I never got in my old department.  He was to say the least, not happy with me and do I care? NO, I fucking don’t!  But, this will be the catalyst I’m sure that will cause me a couple of more headaches because he’s a macho, asshole man-prick that thinks he deserves my respect and attention.  And this will only give me more blog fodder to post about him and I think we all know where this is headed. 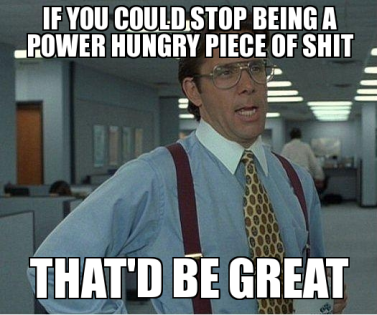 So in addition to dealing with Buzz McCallister, the Impostor Huntress was at it again, only this time with the poor coordinator/admin assistant that is assigned here to the office.  This lady, whom I’ll call Janie, is a sweet older lady with a heart of gold.  She does most of the purchasing, deals with the front office traffic, answers the phone, helps with room reservations etc.  She help the associates out only when we have so much to do and not enough time to do it.   On Monday she came in and we talked for a bit and as I walked out of my office through the reception area, her phone rang and she said “Oh, okay I’ll be right there” and walked into the copy room, grabbed three reams of copy paper and walked off.  As I made my way back into the office she was walking back to her area and then her phone rang again.

I sat down at my desk and then I saw her rush past my office down the hall and out of sight.  I got up to go scan something and she came back and then she asked me if I wanted some coffee.  I said no, that I had already had my two cups and I thanked her.  She got up and took the coffee pot from the station and walked back towards the back.  I was curious as to where she was going as she passed the President’s office and that’s the only person I would think she’d cater to the way she was.

So when I turned the corner at the end of the hall, Janie was standing in Impostor Huntresses’ office, pouring her coffee as Impostor sat in her chair laughing about something or other.  I asked Janie, “What are you doing?” and Janie replied “Getting coffee for Impostor” and THAT pissed me off.  I then realized that this poor woman, who has a lung condition no less, was rushing back and forth to go and cater to Impostor Huntress the entire time!  I asked Janie to let me talk to Imposter alone.  She left and I closed the door to her office, sat down in one of the chairs as if to make her feel comfortable and then I asked her “So….why is it that you feel the need to ask Janie to play step and fetch for you?” 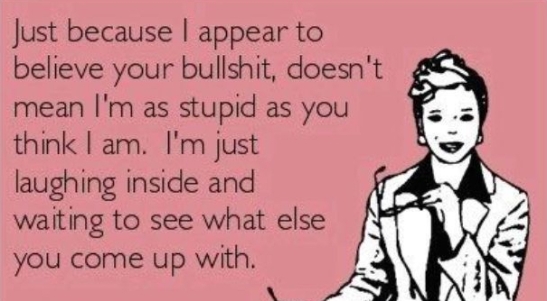 She said “What?” and I said to her that having this poor woman go get reams of copy paper, make copies and fetch her coffee is NOT something we, as associates need to have her do.  She told me “Your new here, obviously you don’t know how to play the game.”  I told her that while I may be new,  I’m self-sufficient and that whatever game she thought I needed to play, wasn’t something I needed to make others feel inferior.  If she had to make herself feel more important by bossing this older lady around she had bigger problems than thinking she was “Management.”  She cleared her throat and said “That’s what they’re here for, to be utilized to help us with our work” and I said “What you’re doing in not utilizing her to help you, your abusing your authority because you’re a lazy fuck.”

She looked at me and said “You’d better be careful, I have seniority” and I said “I don’t care if YOU have seniority, YOU’RE not my boss.  And YOU need to do shit for yourself, getting copy paper and coffee is something I would never have someone do for me.  But obviously you have power and ego issues, so YOU will never be management or administration.”  She looked at her coffee cup and said “You do your work and I’ll do mine as I see fit.”  I laughed and said to her “Be careful the way you treat others because karma is a bitch and so am I” and walked out of her office.  I told Janie she never had to do any of the shit she did for Impostor Huntress….EVER.  She just looked at me and laughed and nodded her head.  So now there’s this awkward tension between me and Impostor.

She’ll never win this, I’m positive,  because I see weakness in her that can never overpower my confidence and sense of self-worth.  I don’t need to belittle or have others cater to me in order to make myself feel better about myself.  She uses the word power and control a lot.  I made it known at one of our meetings that power, just like control is an illusion and that anyone who believes it’s attainable, is delusional.  I’m sure she loved that.

What is it that song says???  You don’t pull on Wonder Woman’s crown, you don’t spit into the wind, and you don’t try to take the baseball bat from Harley Quinn.  Okay that’s not quite what the lyrics say but, y’all get the picture.

Let’s just say, that just because you’ve been doing a job for a certain amount of time doesn’t mean you’ve been doing it right.  I’ve already been threatened with someone’s seniority who obviously doesn’t know where I came from or how I got here.  And is somehow seriously underestimating my abilities and/or knowledge and education and my patience and temper.

But one things for sure, this is going to be one wild ride.  I’ll keep you posted on my new adventures of …..(insert echo here)…..The Huntress and the Impostor!!!!!

This is the Huntress, watch your back, stay safe and wear your mask, over and out!