I began my new job on Monday of last week, it was to say a very rocky first two days.  This is because here in my new position I need to be independent and a “self-starter” something I couldn’t be in my previous department.  As you all know I was micromanaged to death which included the request to re-write my letter of resignation.  Yes, that’s right I was asked to edit/re-write my resignation letter.  Okay I’m getting off track here.  Anyway, I had really had it with my supervisor, although a very nice lady, after she got preggers, the micromanagement began.  My new boss, is telling me to be myself and take control of my position, and that I don’t have to run everything by her.  She’s a goddamned Vice President, and she’s telling me I DON’T have to run everything by her?!?!?!

By the way, let me just add that she is the most kick ass older white lady I have ever met.  She’s cutthroat and she does not bullshit around.  She holds her own in a room full of male VP’s and demands that she be respected because she’s earned it.  She has a lot of experience and she’s telling me that she hired me because I came across as confident and astute when she interviewed me.  Something I was not during my time with my old job, and something I struggled with the first two days on the job last week.

Everyone here is so nice and laid back it’s scary to think about.  One thing that does perteb me is this, this is THE OFFICE OF THE PRESIDENT, and all the other executives dress like they’re going to work-out or shopping for groceries.  I’ve been told by several VP’s and my boss that I dress the part for my job, in which my boss decided to let the man himself (President) that everyone should dress professionally.  Granted most of the staff and student’s aren’t on campus because of the COVID thing, but they are slowly being phased back in.  And now, the other “Huntress” (there are two of us with the same name but technically there is only one Huntress, y’all know that) told me that her boss, another VP mentioned that she needs to dress more business casual.  So, in short, I have already (maybe) alienated some of my new co-workers.  But then again, they work in the most important office on campus, they need to reflect it, no? 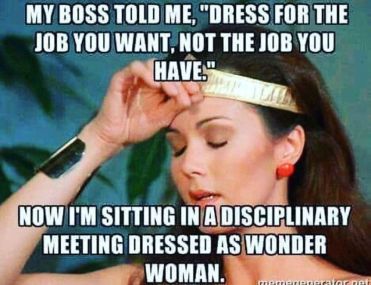 I’ve been busy non-stop since I began last week, I have not posted anything in almost over two weeks, because I now work 8-5 (which I hate, but what can I say?) and when I get home the first thing I do is run.  Then after I make my lunch, put a couple of loads of laundry in and do what I need to for the next day.  I haven’t even had a chance to catch up on the blogs that I follow (apologies to all my fellow bloggers) and I think I need to come up with a rhythm in order to make sense of all the chaos in my life since I began my new job.

And it has been chaotic, meeting after meeting, report reviews, fiscal budgeting, fires, hires…..oh that’s because my boss is “the” boss for all the clinics so every hire and fire goes through her.  Policy reviews, emails, scheduling, phone calls and such that when I leave my office I’m mentally spent, and running helps me forget the business day.   Oh did I forget to mention that my previous department emailed me last week over a small calculator I forgot to turn in? No? Well they did, I got an email from my former supervisor about a fucking $6 dollar calculator! I didn’t respond to her I just took the fucking thing to my old office and left it with the girl at the front desk and asked her if she could email my former boss to let her know that I had dropped off the damned thing.

I’m so done with that place, lucky for me I don’t really have to deal with them in a professional capacity.  I’m more on the fiscal side of things now, instead of the proposal/funding, dealing with idiot faculty members and such.  I’ve already come up with pet names for some of my new coworkers, but that’s a new post entirely.  For now, this is The Huntress, over and out.