This week I signed my offer letter and submitted my information for my background check for my new position.  My new department asked me to wait to give my current department notice until I got my official offer letter.  So when I did, I turned in my letter of resignation to my supervisor, which was Wednesday.  But I had told her on our weekly update meeting over the phone.  She has these meetings with myself and Thing 2, the other research administrator.  So after we went over what proposal’s I had pending and such and right before we hung up, I let her know I had accepted the position.  She congratulated me and then I told her I would submit my letter of resignation.  I had one written up about two weeks after Baby Kermit was hired (yes I actually did.)  About ten minutes after I sent her my letter, she sent it back with…….goddamned EDITS!!!! I was livid, she sent it back with highlights and asked me to change some of the wording.

I sent it right back to her and said that this was my letter of resignation and NOT one of the proposals I was working on and it was not subject to her input.  She didn’t respond, but about two hours later I got an email with her copying my director and the director of the office of research saying they will accept my letter and resignation.  I sat there thinking to myself, WHAT THE LITERAL FUCK?!?  Anyway, I’ve given my two weeks’ notice and at first when I got the phone call telling me that I had gotten the job I was a bit worried about leaving my supervisor and Thing 2 with all my work pending,  because my supervisor is pregnant and Thing 2 has a lot on her plate.  Okay I do feel bad for Thing 2,  she’s a nice kid and does a good job.

But after last Wednesday I’m like,  fuck no I don’t feel bad,  and I could care less if they give what remains of my pending proposals to Baby Kermit,  that bitch can fry in hell for all I care.  AND she doesn’t even know that so many (so very many) people in our office can’t stand her stupid ass.  I’m just so glad to be out of here.

Then, suddenly it hit,  last night I woke up in the middle of the night full of anxiety about my new job.  It’s in “The” main office in the University,  its where everyone is held to the highest standards,  and I kept thinking as I lay in bed at 2:55am,  would I be able to fit in?Would I be able to do what is expected of me?  After rambling on about how I use to love my job,  and how it was the best job I had ever had (up to the point when they went and hired an idiot,  who may or may not have helped in the mismanagement of grant funds at the other university) and now, where do I find myself?  I want to go into my new position with optimism and clarity that I can do this, and yet all the second guessing and micromanaging I’ve gotten in the last year has me doubting my own abilities.  THAT is NOT acceptable!  But even so,  I still lay there in the middle of the night questioning EVERYTHING about myself,  professionally.  My experiences,  my education and my judgement. 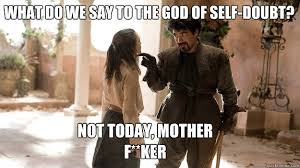 Goddamned this fucking place and how it’s made me feel,  because I know I’m educated enough to know that this emotional and psychological bullshit that I’ve been put through all because someone’s hormones are going bat-shit crazy due to the fact that there is a life sucking force inside her right now is,  something I should not be subjected to!  Yes I’m blaming a pregnant woman for the micromanaging I’ve been through since October,  all because that’s when she found out she was expecting.  I see that as a connection,  because that’s right about the time all the micromanaging began.

Then on Friday we had a video team meeting,  we played Jeopardy (this was fucking Baby Kermit’s idea,  I swear I could kill the bitch) it took about an hour of my time.  Time that I could have been working on tying up all loose ends on what is left of my proposals.

Then my supervisor said that she had an announcement, and then told me to tell everyone about my new “opportunity” and I was like what the fuck?!?  She told me she was going to announce this shit to the team.  I sighed really loud and kind of in protest, and then I told everyone about my two weeks and new job.  Then our newest team member,  the nice lady that was hired to replace JP said,  “Oh Veronica, was it me?” And she laughed as did everyone else,  and then I responded with “Oh my, no Angie (not her real name) it’s not YOU” and everyone stopped laughing….

I’ve had four of my proposals ready for my supervisors review since the end of April/beginning of May and she hasn’t gotten around to it.  Why? Because she’s a goddamned micromanager and has been working on other shit that Thing 2 has been working on.  So when she did finally get around to it,  she started sending me emails on what I needed to correct.  Finally on Friday afternoon I sent her an email (nice, polite email) that the deadline for all of these is at the end of May and edits should have been done early on,  that’s why I had them ready for her by the end of last month.

But I would tell her that I’d send all the information to the faculty members for them to change (this late in the game) and “try” to get them back to her before I leave.  She didn’t respond.  So,  my supervisor is overwhelmed because she is so busy micromanaging my work,  and I’m assuming Thing 2’s as well, that she can’t keep up.  Instead of allowing us to use our own judgement,  make mistakes to learn from them,  build a rapport with the faculty members that allow us to get to know them and how they work,  and produce quality work on our own. 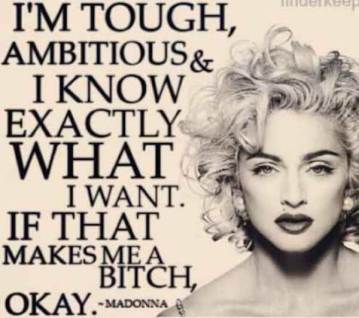 She instead want’s us to sound like her,  make sure we write like her,  talk to the faculty members the way she does,  and leave our professional individuality and experience by the wayside so we can be exact replicas of who she is.

No thank you! I may not be done bitching about this place,  that won’t happen until I leave,  but I’m sure I’ll have plenty to write about in the next two weeks.

On the Huntresses home-front, one of my maternal aunts came down with that fucking COVID virus.  She has underlying conditions, she’s diabetic and she contracted it at the clinic she works at.  She’s a medical assistant, she’s been in quarantine for almost three weeks.  I just found out about this TODAY, because my mother, who can’t remember what day of the week it is, says she definitely told me.  Which she certainly did NOT! I think I would have remembered her telling me one of my aunts having COVID19!!  I reached out to my poor aunt who has just gotten her voice back and she told me (and I quote) “I wouldn’t wish this illness on my worst enemy.” Which is admirable because she’s a good person, but you know me, I have enemies and people I don’t like so draw your own conclusions.  She’s doing better and she got cleared to be able to go out in public.  She said she wasn’t,  she was going to take one more week of self-quarantine. Talk about hitting home in this time of uncertainty.  Y’all take care of yourselves and remember,  when you take care of yourselves you are taking care of everyone around you.

This is the Huntress, over and out!