Is not something I say too often, other than at work I mean, because that comes out of my mouth every single day to faculty members who don’t get what my job is and how I’m here to help them not fuck up their proposals.  But in my private life, I don’t say it often when I have to explain to someone who asks me if I’m married and then find I’ve been divorced for twenty years and haven’t remarried.

Last week my office was extremely busy, I stayed late almost all week, leaving the office about six-thirty or so and getting home mentally exhausted to where I didn’t even run or eat dinner.  But on Thursday we had a sort of “meet and greet” with other departments so we (and they) could get to know what it is we do and why and vice versa.  The turnout was a lot more than first expected, but then again advertise there will be “refreshments” and the entire university will show up to freeload a catered affair.  So we had to mingle and introduce ourselves to faculty and staff members we’d only dealt with over the phone, not really knowing each other than by our voice.

Our Vice President, my director, supervisor, JP, Baby Kermit and Thing 1 were all doing this awkward social dance, pretending to be nice (okay I was the only one pretending) and introducing ourselves, generating small talk before our VP was to speak to the crowd to make some small announcements regarding changes of operating procedures on how we would work on grant proposals.  This little work shindig was after work so there was alcohol (thank god) which consisted of red and white wine only, appetizers and small individual dessert options.  As I made my way around the room I encountered a faculty member that I’d dealt with on many occasions but never knew him face to face.  We’d emailed each other back and forth regarding his proposals, he’d call me to ask questions and such.  But neither he nor I knew what we looked like.  So when I introduced myself, he looked surprised, and he’s a professor okay so he has no social skills.  I realize not all professors/faculty members are like that, but in my experience I’ve realized that a lot of them don’t, I’ve worked in higher education for almost eighteen years.  We shook hands and while holding my glass of chardonnay he kept on shaking my hand while he said “Well, wow I’m surprised” and I responded with “About what?”

He said “Don’t get me wrong, I just imagined you being a much older woman, say fifty or so with thick glasses, overweight in frumpy librarian garb.”  He laughed as though he thought I found this funny, which I did but that’s another story.  I didn’t laugh or show any emotion as his response was clearly from someone who had so social filter or knows how to take social cues.  Standing right beside him was our head of fire safety, I’m going to call him Kevin.  Kevin knew this faculty member who I’ll call Professor Dumbass (PD for short).  Kevin is a handsome man, former fire department chief of instruction and now works for the university.  Kevin was making all kinds of gestures for PD to change the subject or just plain shut the hell up, I could see it and he was really trying not to make it obvious. 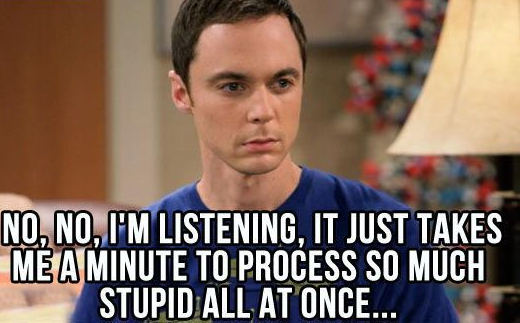 But PD kept on, and on about how he thought I looked a certain way, and how I sounded much older on the phone.  I could have said the same thing about how I thought he was younger, and sounded so much dumber in person than on the phone.  But I was just going to stand there and let this idiot dig himself into the quicksand that is the Huntress’ bad side.  Kevin on the other hand could see the expression or lack of expression on my face.  He was doing his damnest to try and deflect the conversation to something else.  But PD wouldn’t give, then PD continued to talk about how young and surprisingly attractive he thought I was (yes he actually said that) which kind of pisssed me off.  All the while still holding and shaking my hand.

I finally pulled my hand out of his and said “It was nice to meet you Professor Dumbass, but I have to go and mingle some more” and tried to walk away.  Now remember I said “tried” to walk away, and then he decided to say “Wait, um so are you still going to help me with my upcoming submission to that private foundation I emailed you about?”  I told him I didn’t get to choose which faculty member I work with, we are assigned the proposals based on our specialty.  Unfortunately I’m the one that deals with private foundation submissions but I didn’t need PD to know that.

As I walked away he followed me, as did Kevin and then PD asked me “Will you and your husband be coming to the Christmas gathering that Medical Education is having in December?”  A stupid, roundabout way of asking if I was married I think, and I told him I didn’t have a husband and that I was pretty sure I wouldn’t be going to that event.  Then Kevin sighed out loud and said “PD let’s go over and talk to Dr. Torres.”  But did PD listen, no he didn’t, I saw the frustration on Kevin’s face and he mouthed “I’m so sorry.”  I just nodded to let him know it was okay, and PD continued with “How are you NOT married? I mean, I thought women like you all had husbands.”   Kevin hung his head as to say, just stick your foot in your mouth a bit further so you can choke on it you idiot.  I said I was divorced, and the PD asked how long of course I should have walked away, I really should have but I didn’t.

I thought, why not let’s try and make this asshole understand that he shouldn’t be so stupid and ask questions like those he’s asking me.  So I turned and said “Women like me? What do you mean by that PD?”  He looked surprised, and said “Well I’m just saying….” And then I interjected with “You’d better choose your next words very carefully because our HR rep is only a few feet away, do you get where I’m going with this?”  Obviously he didn’t, but then I walked away and told PD not to follow me, I kind of said it really loud and in an angry tone.   Which low and behold he was actually shocked at and even got somewhat angry.  Kevin came up to me a while later after he’d escorted PD out of the event and apologized for PD.  I didn’t know they were actually friends outside of work, not just at work.

Kevin kept saying he was sorry and I told him not to worry about it, it wasn’t his fault that his friend acted like that or that he was a complete and total douche bag.  Kevin laughed and tried to explain his friend isn’t very social especially around women.  I told him it was very obvious, we both laughed and then Kevin (who is married) asked me if I was really divorced.  I said yes, that I’ve been divorced twenty years this November.  He said he was sorry and I said not to be, that the divorce was probably the best thing to happen to me.  I explained that if I had stayed married, I wouldn’t have gotten to go to college and get both my degrees, or raise my boys to be good, decent, responsible adults.  Or learn the lessons I had to in order become the person I am now.  He raised the wine glass he was holding and said “Lets toast to your divorce and the evolution of the woman that you’ve become” I was surprised and a little verklept as I could feel the tears welling up in my eyes.

I raised my glass to his, clinking them and then another professor walked up and said “So….what are we toasting?”  And Kevin said “To divorce” and I laughed and the professor looked confused.  Before Kevin could explain, our VP began his speech (thank God) and I gave him a wink, he winked back and I walked to go and stand next to my coworkers.  Now before that day all I knew of Kevin was that he’s our universities Fire Chief, but now I know he’s a compassionate man with a stupid friend who turned a potentially bad situation around and saved his very stupid friend from being stabbed in the parking lot.  As well as saving me from explaining why I’m fifty years old, divorced and haven’t been remarried at my age.  Because really, why do I have to explain that shit to anyone?

Until next time remember, chin up, soldier on and watch your back!

35 thoughts on “Let Me Explain……Or Maybe I Should Just Stab You Instead?”